Little Town Jerky Company was founded in 1994 by Mark and Dawn Ebels, but the idea for the business started several years earlier. In the mid 1980’s, Ebels General Store began offering smoked meats made by Mark Ebels. Mark quickly discovered that processing and curing smoked meats is an art. He trained for months with the specialists at Max Bauer Meat Market in Traverse City. German sausage expert Harvey Reichert also taught Mark about spices and the fine points of preparing different products. Customers responded enthusiastically and began asking, “Where else can we buy your products?”

From that small beginning, Little Town Jerky became a reality. The United States Department of Agriculture (U.S.D.A.) approved meat plant opened in 1994, with the focus primarily on the company’s jerky products. Over the years the product line has expanded to include everything from smoked picnic hams to cooked beef ribeye. Working today with their sons Bob and Tom, Little Town Jerky Company has become well known around the state and is in multiple retail locations. 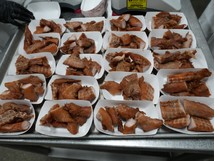